This exhibition is the first major study of California midcentury modern design. With more than 300 objects—furniture, ceramics, metalwork, fashion and textiles, and industrial and graphic design—the exhibition examines the state’s role in shaping the material culture of the entire country. Also, featured a video on Deborah Sussman speaking on design.

Organized into four thematic areas, the exhibition aims to elucidate the 1951 quote from émigré Greta Magnusson Grossman that is incorporated into the exhibition’s title: California design “is not a superimposed style, but an answer to present conditions…It has developed out of our own preferences for living in a modern way.”

Pacific Standard Time: Art in L.A. 1945-1980 was an unprecendented Collaboartion of more than 60 cultural institutions across Southern California coming together to celebrate the birth of the L.A. art scene. Each institution made its own contribution to this grand-scale story of artistic innovation and social change, told through the multitude of simultaneous exhibitions and programs.

The “Six and Six More” catalog (picture above), designed in 1963, appeared in the exhibit and is featured prominently in the book accompanying the exhibit. 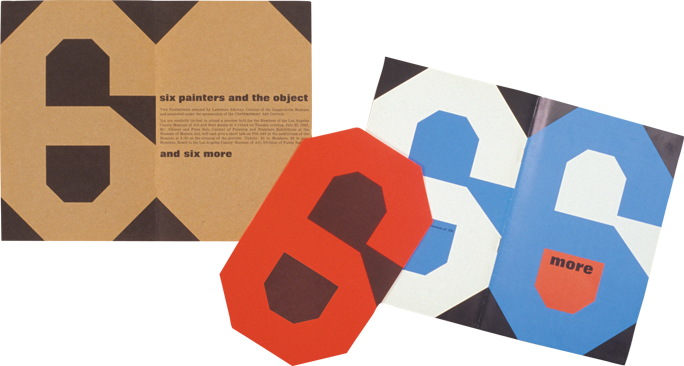